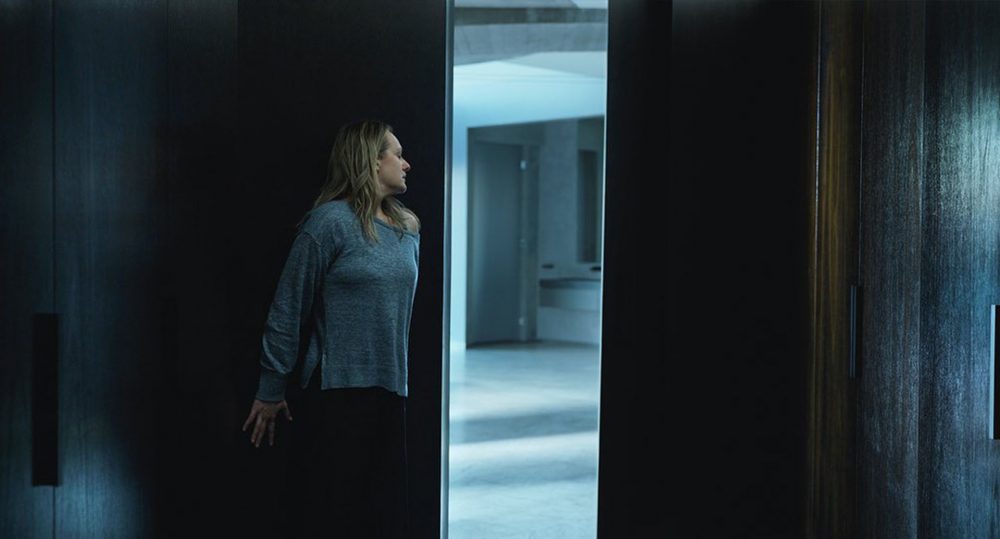 This is not the monster movie you might be thinking about.

H.G. Wells might have created this figure in 1897 with a theme of violence, but that is where it just about stops when it comes to similarities. Director Leigh Whannell has updated the story on all fronts – including a suit inspired by existing theories on invisibility and the #metoo movement – and successfully creates one worthy classic for the horror sci-fi archives.

Elisabeth Moss is Cecilia Kass, a stricken young woman escaping from her lover. She succeeds initially, but his hold proves to mentally incapacitate her as well. The poor girl is too afraid to even retrieve mail from the front of the house. As she struggles to gains semblance of a normal life, she is hit with the news that her lover is dead. Woots!

BUT. This is where the real paranoia comes in. As little incidents stack up, Kass is convinced that her lover – a world-leading optics scientist – has succeeded in creating an invisible suit and is stalking her. Is he or isn’t he? This questions floats about and becomes the central force of the second act. Her ex-lover, her sister, the cops… all gets roped in for a masterful rollercoaster of a ride through the film. To make the audience second-guess is always an elusive artform, and Whannell succeeds in bringing some of that to life.

All this cannot be done without the elegant camerawork by Stefan Duscio. With deft movements and careful framing, the implied becomes all the more terrifying and sinister. It lets each audience have their own individualistic version of The Invisible Man. Also supporting the visual, is the tense score by Benjamin Wallfisch. The score is a viscous canvas that smothers Kass, and both stretches and plucks up the right amount of suspense and fright.

Moss’s tremulous performance is always a joy to watch. Her winning performance in The Handmaid’s Tale is replicated here in its many nuances – fear, vulnerability, and then steely resolve. The supporting actors are exactly that in front of her performance, and the film distributes enough weight so we don’t tire of her. This anti-heroine draws all the right kind of sympathy as she gets increasingly isolated from the manipulations of her invisible stalker – imagined or otherwise.

With a strong performance and tight story, this is one movie you’ll have to see.

Freaky trailer: A Teenage Girl Swaps Body with A Killer

Neve Campbell Back As Sidney Prescott For Paramount-Spyglass ‘Scream’ Relaunch!